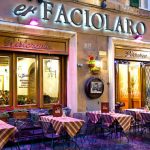 Located beside POP Art B&B door is an historical restaurant of Rome. The restaurant was originally a bakery that served its employees a bean soup for lunch. It seems that the soup was so good that in a short time customers increasingly asked to serve it as a meal. For this reason the restaurant was called “Er faciolaro” (who cooks beans). Since then the restaurant has kept its original recipes, expanding the offering to its guests with many other dishes typical of the Roman culinary tradition. www.erfaciolaro.it 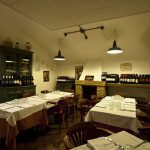 Near Pantheon square is one of the best typical food restaurants in Rome. \”Maccheroni\”, Italy\’s most popular dish worldwide, The restaurant has maintained and emphasized the delightful details of its rustic structure, for an ambience that is inimitably welcoming and warm. Maccheroni\’s menu offers true, traditionally homemade Roman cuisine, as well as Italian regional specialties.
www.ristorantemaccheroni.com 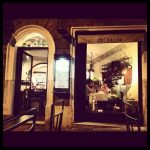 Close to Spanish Steps, a new restaurant which merges old traditions with innovations. Enosteria dedicates its time to rediscover flavors perhaps “homely” but taken to a new, delicately refined, level. It’s the “seventh sense” of the family that makes it mix tradition and innovation, to achieve small concentrates of “contemporary” cuisine.
www.enosteria.it 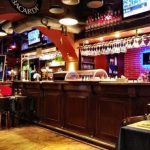 Historic pub in the center of Rome. This old Pub located between Campo de Fiori and Piazza Navona offers a very nice opportunity to drink a cocktail or a beer at very convenient prices. There is good music and lot of people inside and outside. 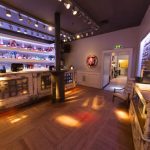 Everything you need for a perfect night in Rome. Located into the historic center of the city (Pantheon) this club is much more than a standard place where drink and dance. It is a sophisticated restaurant, an after dinner bar and a disco club. www.sharivari.it 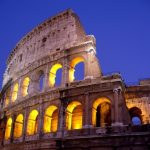 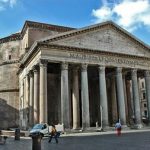 The Pantheon is a building in Rome, Italy, commissioned by Marcus Agrippa during the reign of Augustus (27 BC – 14 AD) as a temple to all the gods of ancient Rome, and rebuilt by the emperor Hadrian about 126 AD. The building is circular with a portico of large granite Corinthian columns (eight in the first rank and two groups of four behind) under a pediment. A rectangular vestibule links the porch to the rotunda, which is under a coffered concrete dome, with a central opening (oculus) to the sky 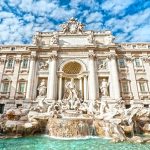 Trevi Fountain (Italian: Fontana di Trevi) is a fountain in the Trevi district in Rome, Italy, designed by Italian architect Nicola Salvi and completed by Pietro Bracci. Standing 26.3 metres (86 ft) high and 49.15 metres (161.3 ft) wide,[1] it is the largest Baroque fountain in the city and one of the most famous fountains in the world. The fountain has appeared in several notable films, including Federico Fellini’s La Dolce Vita, and is a popular tourist attraction. 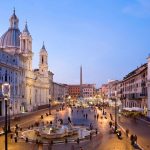 Piazza Navona is a city square in Rome, Italy. It is built on the site of the Stadium of Domitian, built in 1st century AD, and follows the form of the open space of the stadium.[1] The ancient Romans came there to watch the agones (“games”), and hence it was known as “Circus Agonalis” (“competition arena”). It is believed that over time the name changed to in avone to navone and eventually to navona. 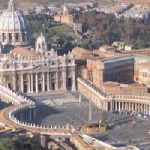 Designed principally by Donato Bramante, Michelangelo, Carlo Maderno and Gian Lorenzo Bernini, St. Peter’s is the most renowned work of Renaissance architecture and remains one of the largest churches in the world. While it is neither the mother church of the Catholic Church nor the Catholic Roman Rite cathedral of the Diocese of Rome, St. Peter’s is regarded as one of the holiest Catholic sites. It has been described as “holding a unique position in the Christian world” and as “the greatest of all churches of Christendom”.